After being imprisoned in Turkey for two years, Pastor Andrew Brunson was finally released one year ago. A political pawn held captive for his faith, his trial and release made national news. But Brunson’s full story was never told … until this month.

Charles Morris sat down with Andrew and his wife, Norine, to talk about what he’s learned in the year after his release from in a Turkish jail. Brunson’s story is a great reminder of God’s faithfulness even in the darkest of times. 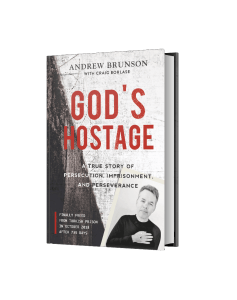 In 1993, Andrew Brunson was asked to move to Turkey, the largest unevangelized country in the world, to serve as a missionary. What followed was a string of threats and attacks, but also successes in starting new churches in a place where many people had never met a Christian. As their work with refugees from Syria, gained attention and suspicion, Andrew and Norine acknowledged the threat but accepted the risk, and in 2016, they were arrested. Though the state quickly released Norine, who remained in Turkey, Andrew was imprisoned. Accused of being a spy and being among the plotters of an attempted coup, he became a political pawn whose name was soon known around the world.

God’s Hostage is the incredible true story of his imprisonment, his brokenness, his faithfulness . . . and his freedom. Anyone with a heart for missions, especially to the Muslim world, will love this tension-laden and faith-laced book.