Steve McQueen: The Untold Story of an American Icon You may know him from hit movies like Bullitt, The Magnificent Seven, or The Great Escape, but few may know that Steve McQueen (or “The King of Cool”) became a Christian later in life.

He had it all … money, fame, luxury sports cars, and lavish homes, yet he still felt empty inside. And his emptiness sent him down the dead-end road of drugs and alcohol. Thankfully, that wasn’t the end of Steve McQueen’s story! The untold story is finally told in the new DVD, Steve McQueen: American Icon. 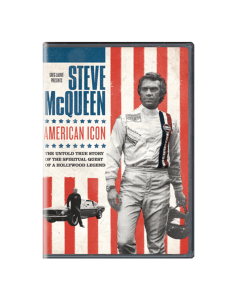 Steve McQueen, one of America’s most endearing and intriguing movie stars, “is still the King of Cool” according to Esquire Magazine. On the surface, McQueen had everything he could want—fame, cars, homes, and more money than he could spend in a lifetime. Follow an avid fan of the actor, Pastor Greg Laurie as he hit the road in his mint Mustang (replica of McQueen’s car in the classic film Bullitt), traveling the country in search of the true, untold story of McQueen’s redemption-filled final chapters. Discover this amazing, true faith journey narrated by Gary Sinise.